We are pleased to invite you to TAP Christmas Networking Drinks 2018 with our special guest, Dr Dhananjayan Sriskandarajah.

At this time of giving, it seems apt to have a special guest who has spent the majority of his working life in the third sector, and who has recently been appointed CEO at Oxfam GB, one of the world's largest development and humanitarian NGOs.

After becoming the first Asian Australian to win a Rhodes scholarship in 1998, Dhananjayan (or 'Danny' as he is often called) read for an MPhil and then a DPhil in International Development at Magdalen College, Oxford.

His research focused on inequalities and ethnic conflict around the world, including in Sri Lanka. He then held various posts from 2004 to 2009, including Deputy Director of the think tank, the Institute for Public Policy Research, becoming the Director General of the Royal Commonwealth Society from 2009 to 2012, the youngest person ever and first non-Briton to head this organisation. Since 2013, he has been CEO and Secretary General of CIVICUS, the global civil society alliance, and regularly attends global meetings such as the UN General Assembly and Davos.

In 2012, he was named a Young Global Leader by the World Economic Forum. He is a Trustee of various organisations, including Comic Relief and International Alert, and is the co-founder of the Migration Museum Project and the Ockenden Prizes.

Finally, a few weeks ago, he was announced as the new Chief Executive of Oxfam GB, a role he will take over by January 2019.

We are pleased to have him at our Christmas drinks to tell to us about his experiences, career choices, the challenges he has faced and what it means to him to be a Tamil.

Through our events and initiatives, TAP provides the platform upon which Tamil professionals spanning all fields – finance, law, entrepreneurs, techies, creatives, engineers and academics to name a few – can come together in an open and inclusive environment.

Please use this as an opportunity to come and celebrate 2018 with us and meet and mingle with like-minded people.

Do spread the word about TAP with your like-minded friends and colleagues, and encourage them to attend. We look forward to meeting you!

Please do register using the button above so that we have an idea of numbers. 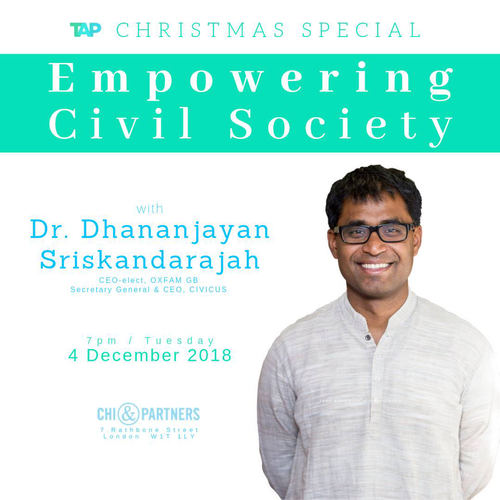